02 - What would a grocery store look like without bees? ft. Hannah Baek 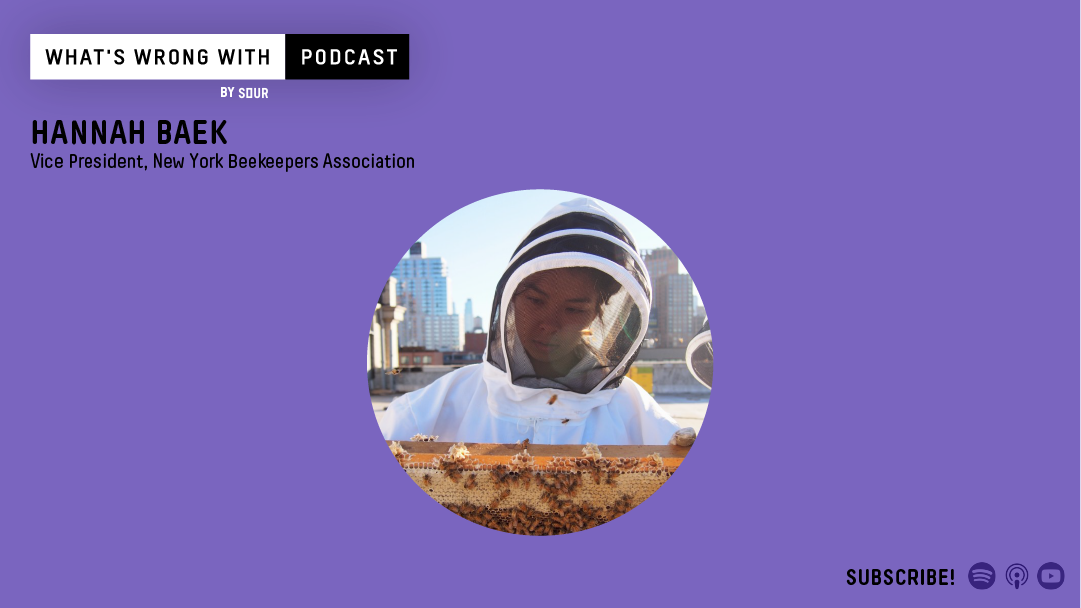 Hannah Baek is the Vice President of the New York City Beekeepers Association (NYCBA). She started beekeeping as a college student in 2014 and has since worked with beekeepers across the world, including France, Russia, Finland, and South Korea. The mission of the NYCBA is to provide our members with a medium for sharing knowledge and mutual interest in beekeeping, and to educate and promote the benefits of beekeeping to the world, in a forum of friendship and fun, and to do so safely and responsibly in an urban environment.

Hello everyone and welcome to the second episode of What's Wrong With: The Podcast. My name is Pinar Guvenc and I'm the managing partner of Eray Carbajo, an award winning Architecture and Design Studio based in New York and Istanbul, with a mission of creating concepts that address urban, social, and environmental problems. Today we're talking to Hannah Baek. Hannah is the Vice President of New York City Beekeepers Association. She started beekeeping as a college student in 2014 and has since worked with beekeepers across the world, including France, Russia, Finland and South Korea. We're so happy to have you today. Thank you for joining us.

Yeah, I'm so glad to be here. Thank you.

So please tell us how you got into beekeeping.

Yeah, sure. So kind of funny, when I was a little kid beekeeping was one of the careers I imagined having as an adult, among a bunch of things like oceanographer and paleontologist. But out of all of them, beekeeper was the only one I actually kind of did. And in a very odd way, because I only started to get into beekeeping, actually when I moved to probably the least likely place in the world to imagine that, which is New York City. And a large reason why is I I read a book before my first year of college as a first year reading experience for all of us, that had to do with New York City's urban agricultural history, it's called "Eat the City" by Robin Schulman. And in there there's different sections about different sectors of urban agriculture and the first was honey and it was extremely exciting to me and had some very famous New York City beekeeper characters in there, including Andrew Cote who is my boss, colleague and friend now, and I was like, "Oh, I have to find this guy. I have to hunt him down and I have to work for him." So I managed to do that and started working with him at his farmers market standa for his honey business. And then after that--that would be the first year of my undergrad. And the following summer I did an apprenticeship with him through the New York City Beekeepers Association, which he is the president of. And so that's how I got started. And since then, I've been core member of the association. I'll work with Andrew, on the hive study, you have and various businesses. I've helped coordinate different events, classes, speakers, with the group, spoken to a couple of media and been kind of on hand to help with the apprentices every year so that we can have a couple of experienced people there to help out. And I've also had the opportunity to do some beekeeping in other countries through an organization called WOOF, which is "Worldwide Opportunities on Organic Farms". And that's just like a very interesting work exchange program. So I've sought out some bee farms in southeastern France, central Russia and central Finland. And I worked on those for a couple summers as a volunteer worker. And I've even gotten to meet other beekeepers in China and Korea. Yeah, so that's, that's how I got into it and it just kind of ballooned out from there.

That is amazing and thinking, especially if all the way through your childhood, you're basically living your dream and raising awareness of it within you know, maybe the busiest city in terms of people, not necessarily bees, and also contributing in a global scape as well. So that's really cool. We honestly on the, you know, contrast of it. We sort of started to think of it maybe towards the end of last year when we were looking into, as an architecture studio, when we're looking into some of the urban matters that we were trying to address through a project we came across a terminology, insect hotel, which we never did before. And then we started looking into why these are popping up--in especially Europe--and why do they matter? And we started to learn about these incredible importance for the ecosystem in general. So, can you basically give us a little bit of information around that, and what are the problems we're facing today around that?

Thank you for listening to our podcast Tune in next week when we sit down with Dr. Seth Lowe, who's the former president of the American Anthropological Association. Dr. Lowe is currently professor of environmental psychology, geography, anthropology and women's studies and director of public space research group at the Graduate Center City University of New York, where she teaches courses and trains PhD students in the anthropology of space and place urban anthropology, culture and environment and cultural values and historic preservation. For more information on the event and our podcast series, visit us at What's Wrong With dot XYZ.

Previous Episode
01 - How is the media a culprit in environmental pollution? ft. Professor Justin Lewis
next Episode
03 - Are public spaces really as “public” as they should be? ft. Dr. Setha Low